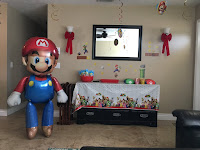 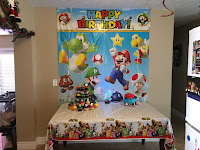 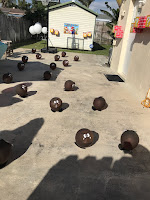 For his 7th birthday, our little guy requested a Super Mario Party....at HOME!! (oh the horror!). I won't lie, this took some serious work on my part just to convince my husband to have a house full of screaming kids for a party, but after all was said and done, it turned out to be one epic birthday!

Our family is really into Super Mario Odyssey these days (the absolute best Super Mario game EVER MADE) and we really wanted to do it justice. I had lots and lots of ideas for games the kids could play but had to narrow it down for a 2-hour party.

We had Mario hats, Luigi hats, and Princess Peach crowns to wear; you could choose your favorite. I, of course, wore a crown (all moms deserve one!). To get more into character, there were also Mario mustaches and Luigi mustaches for the kids and parents alike. 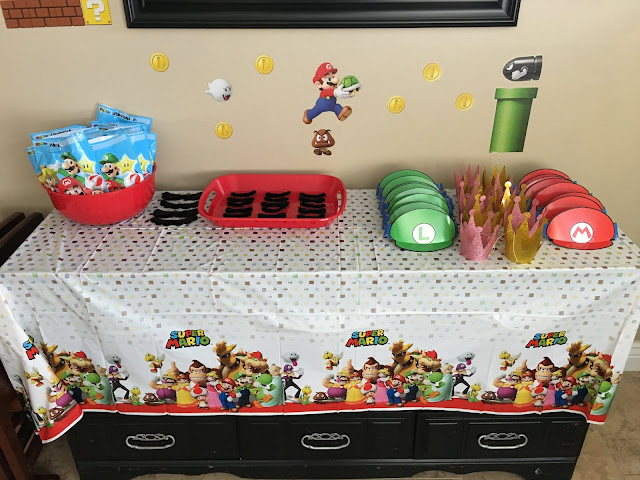 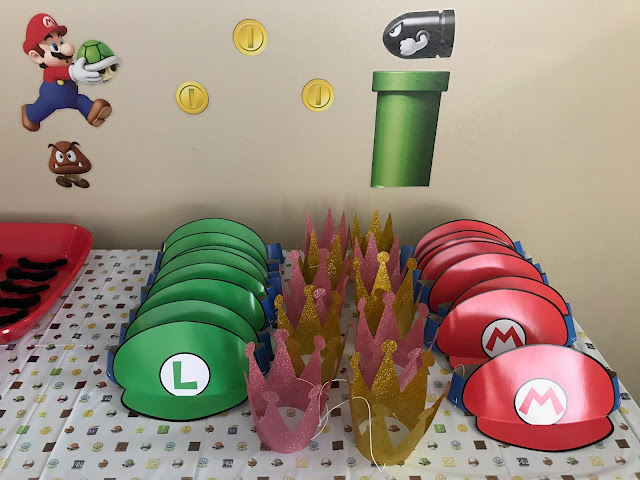 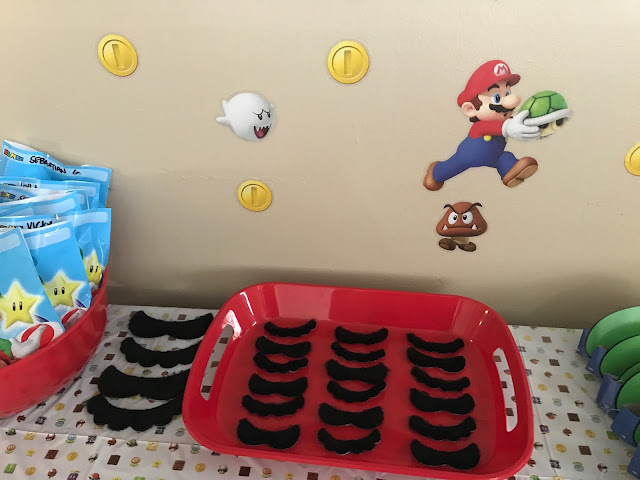 In Super Mario ,there are these little brown "goombas' that Mario has to stomp on and when he does, he gets a gold coin.  So, we got some brown balloons (we used these) and filled them with plastic gold coins (2 coins in each balloon).  The original idea was to put chocolate gold coins inside, but then thought that was probably a bad idea since we were going to have the kids stomp on them.  We cut black paper plates into quarters and used them for feet.  We punched a hole in each foot and pulled the knot of the balloon through and taped it down, just to make sure the feet stayed attached to the goomba.  Then we printed some goomba faces we found via internet search, and taped them to the balloons.

We set up about 20 goombas and let the kids at it!  They had a blast stomping and popping the goomba balloons and then collecting the coins.  This was fun to watch LOL. 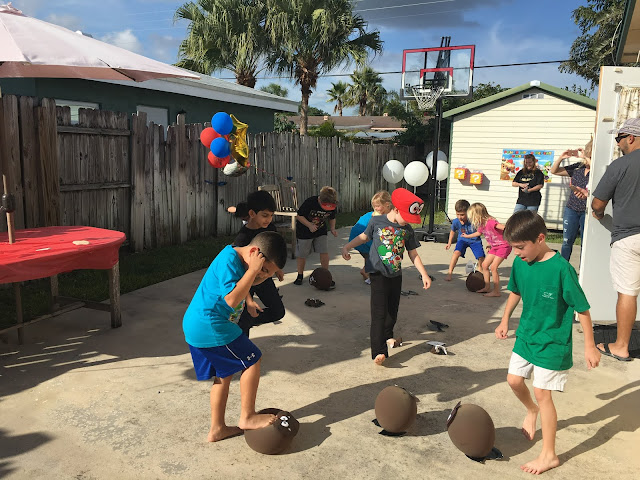 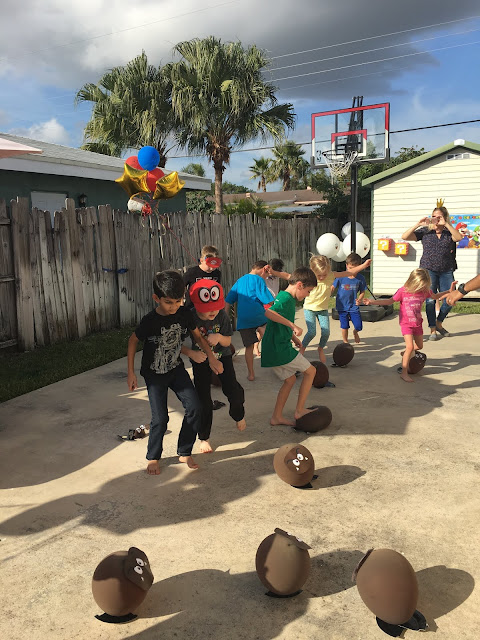 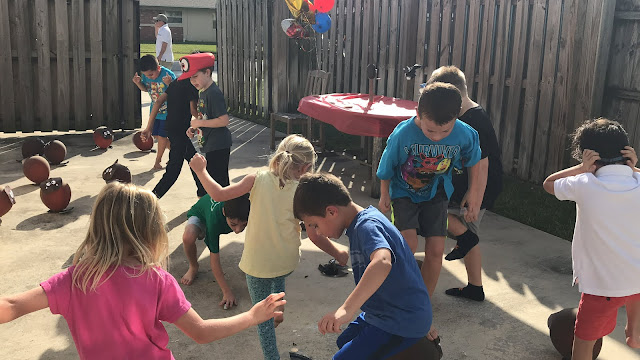 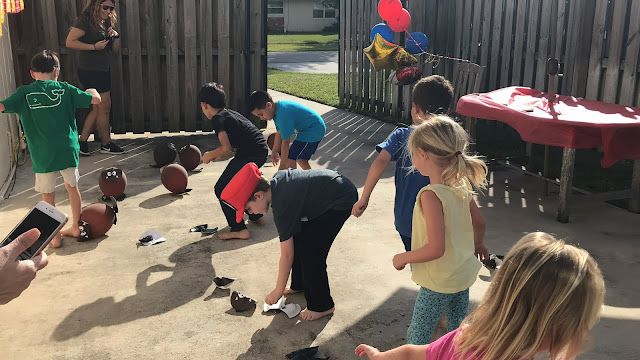 Next up was Dodge King Boo and his Minions

For this "game" we had King Boo and 6 of his Minions zigzagged around the back of our shed (which is kind of a "spooky" spot in our yard) and ended at the Pirahna Plant Garden - will get to that next.  We used a 36 inch balloon for King Boo and 24 inch balloons for his minions.  We printed King Boo faces, also found via internet search, and taped them to the balloons.  And since King Boo wears a crown, we used one of the Princess Peach Crowns, attached with tape.

This "game" was very simple and more of a cool decoration than anything else but the kids loved running through them.  Then had a great time popping them (not intended but, hey, let kids be kids right?) while waiting in line for their turn at the Piranha Plant Garden. 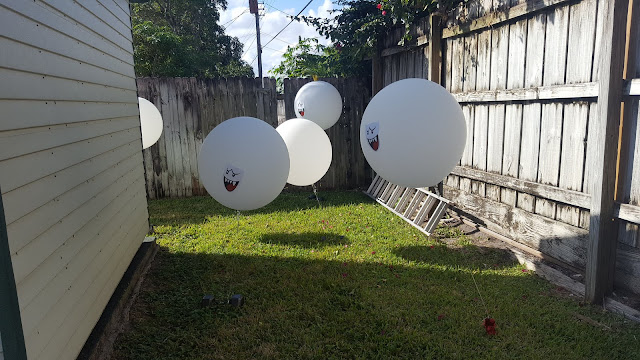 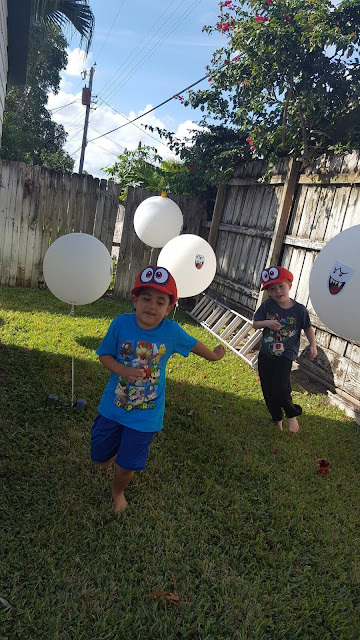 So, they stomped the Goombas, Dodged King Boo and his Minions, now they had to get through the Piranha Plant garden by knocking off their poison spitting heads using Cappy!

We made a garden of Piranha Plants; these nasty little guys probably took the most work but man, they came out great! For this game, the kids had to toss Cappy at the piranha plants to knock off their poison spitting heads. We let each kid have three tries before going to the end of the line.  For the first round, we kept resetting the plants, but once everyone had a turn, we let them all go until all the plant heads were down.

For Cappy, we used frisbees with Cappy eyes taped on (again, images found via internet search).

For the Piranha Plants, we used floral styrofoam for the bases and heads, white sheet foam for the lips, teeth, and spots, wooden dowels for the stems, and the birthday boy cut out leaves from green construction paper and glued them on.  Green spray paint and red spray paint for the bases and heads, respectively.   The plants were secured to the ground using thin wooden skewers. 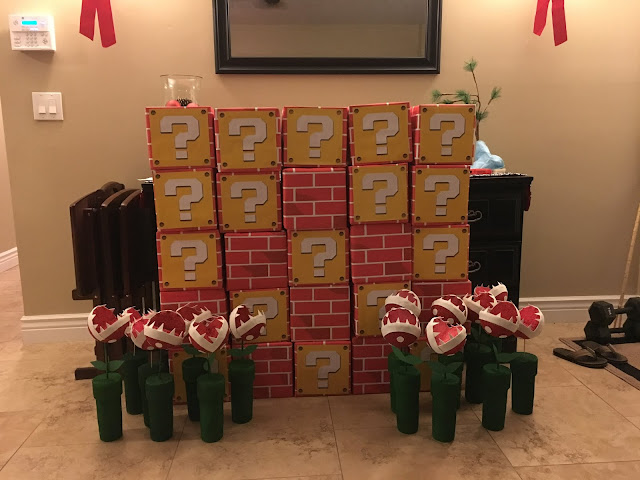 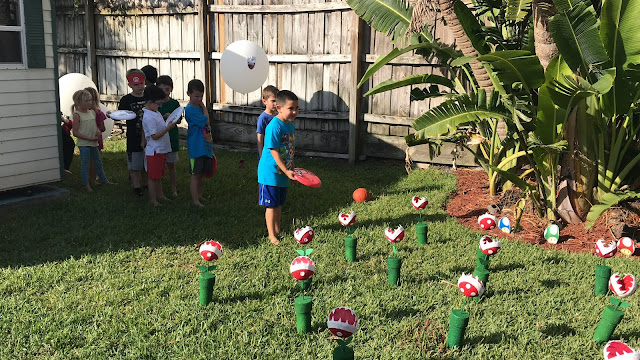 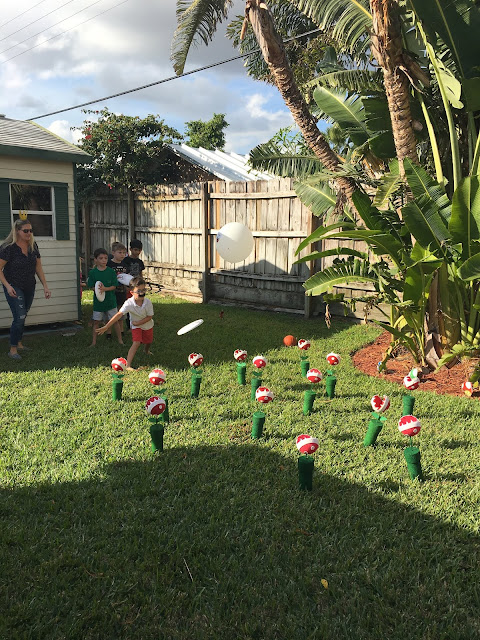 Now, they've stomped goombas, dodged cheeky ghosts, made it through a garden of poison spitting piranha plants, it's time for some rewards to help power up before taking on Bowser and the Broodals!

Time for the ? Block Punch Boxes

You can’t have a Super Mario party without the signature Mario bricks and ? blocks! We used 8x8 cardboard boxes (we used these) wrapped in Brick Paper.  Some of the bricks became ? blocks (? image found via internet image search, printed, and taped to the front of the brick box) that we filled with chocolate gold coins.  The bottoms of the ? blocks were cut out and covered with the brick paper so that the kids could punch right through.  The kids seemed to love this "game" and it was super fun to see the excitement on there faces as they punched through bricks that rained chocolate gold coins (LOL). 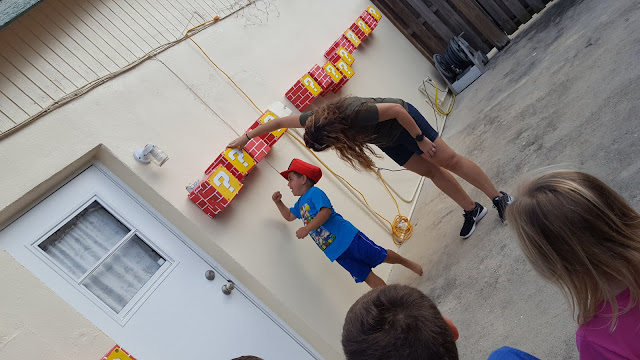 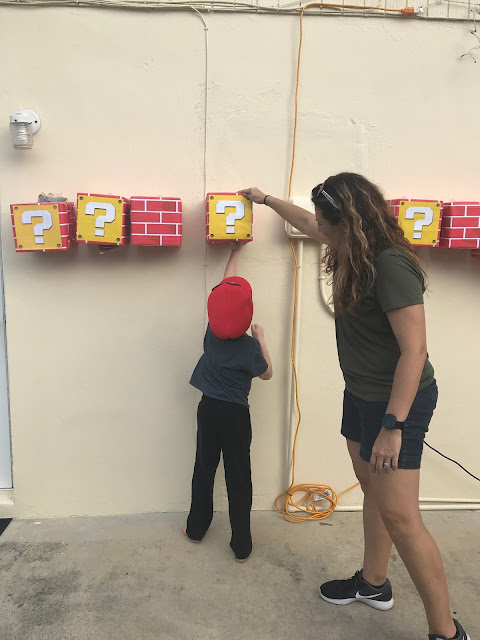 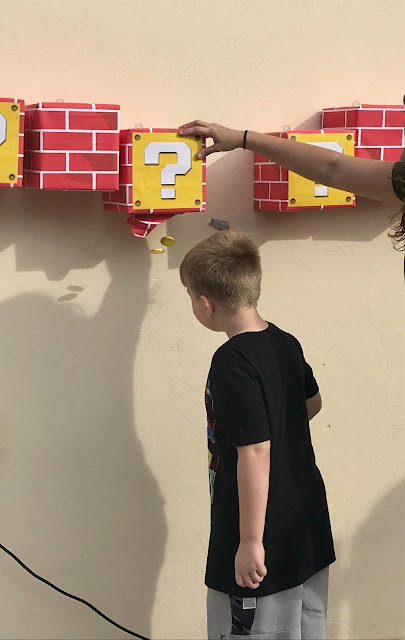 Time to Defeat Bowser and the Broodals! 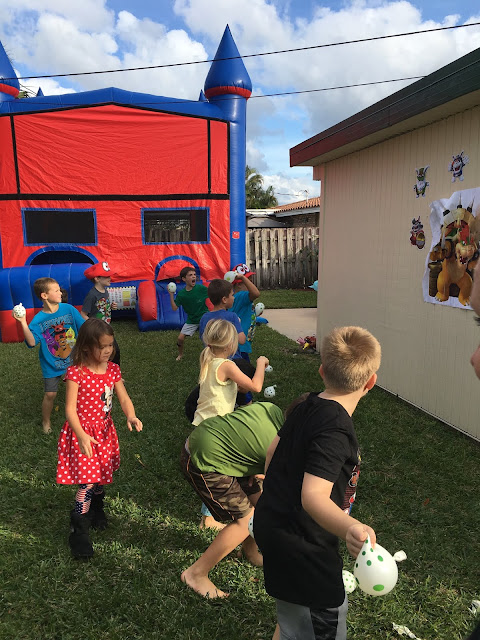 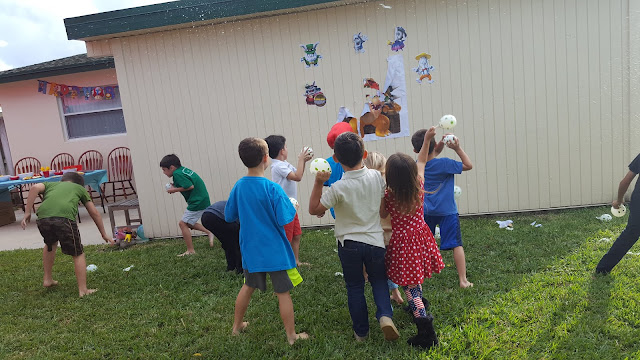 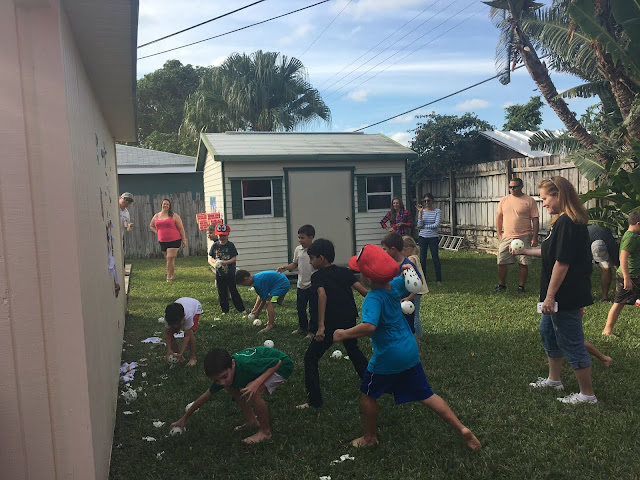 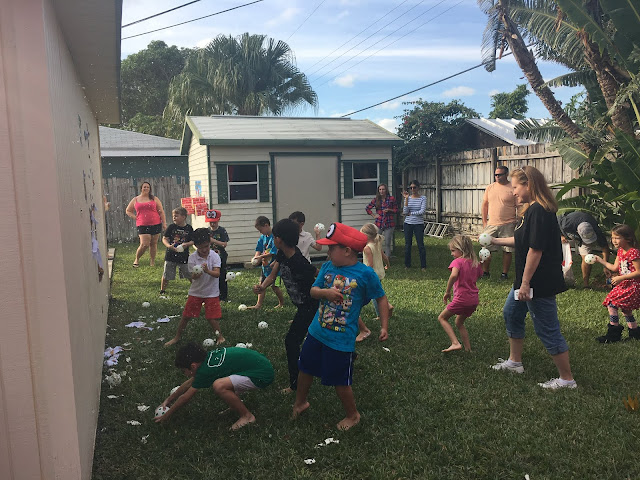 And this my friends, is the Cappy you need to conquer your own Super Mario Birthday Odyssey! 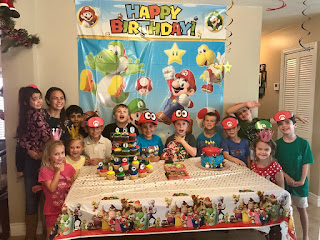 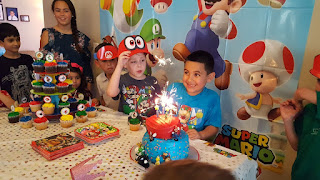 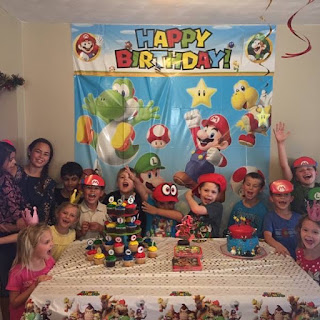 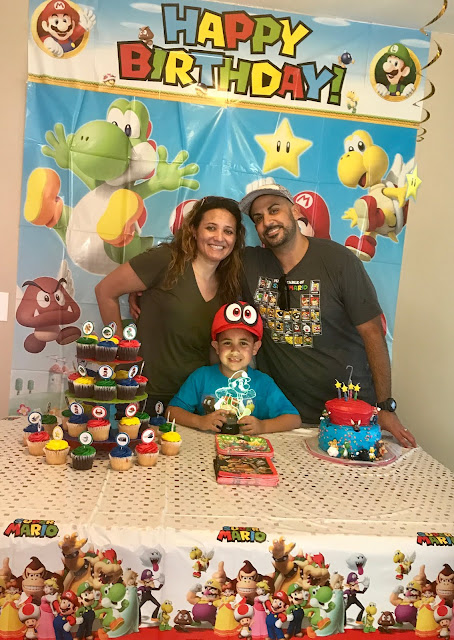 Thanks for stopping by, feel free to leave some feedback below. 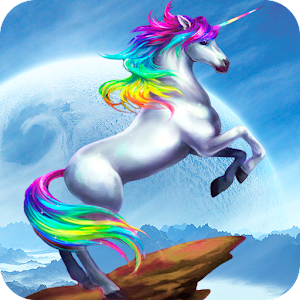 Jenny on the Blog
A modern day working mother who is trying to figure out this balancing act called life and have fun while doing it!